Ahh! To be a honeybee in Paris

The garden is producing well. I do believe the pesticides are the main threat to our bee population. Our bees have had a hard time this year. Our neighbors pour chemicals on their lawns every weekend. Oh give me land-lots of land (or least a little away from a subdivision).
Or maybe we should move to the city.

PARIS - STRANGE as it may seem, bees get a better buzz from the urban Paris jungle than from the countryside. There are all sorts of flowers only short flights away, and little risk of death by pesticide.
Some live in penthouse hives atop historically prestigious monuments - the spectacular steel and glass domed Grand Palais exhibition hall by the banks of the Seine, for instance. 'Honeybees are happy in town, they have everything they need,' said Grand Palais director Sebastien de Gasquet.
Collecting pollen and nectar is no sweat with the Tuileries gardens lying only a short distance away, 'not to mention the Grand Palais' own flowerbeds', he said.
The two beehives set on the edge of the building's huge glass dome last May are rooms with a view of the Eiffel tower and Notre-Dame cathedral. Three or four extra hives are to be added to bring production up to half a ton of honey a year.
City bees, said Nicolas Geant, the beekeeper behind the Grand Palais scheme, nowadays produce four to five times more honey than their country cousins. 'In agricultural areas you can produce around 10 to 20 kg of honey per year per hive while in cities you can get between 80 and 100 kg' he said. And his idea of placing beehives at the Grand Palais - Paris's Garnier Opera house has had its own beehives for years - is aimed at illustrating the paradox.
In rural areas close to farms, there are fewer and fewer hedges, trees and flowers. But in the city 'there are a myriad of small flowers in parks and on balconies, as well as a wide variety of trees along streets and in public gardens - acacia, lime and chestnut trees - that are nectar to the bees.' While Paris is polluted, notably from car exhaust fumes, 'this bears no comparison with agricultural areas where pesticides, fungicides and fertilisers kill massive numbers of bees,' he said.
France's Union of Apiarists (UNAF) has signalled high mortality rates near corn, sunflower and rapeseed fields, while bee deaths across Europe have been 30 to 35 per cent higher than average since the 1980s thanks to a number of factors, including the use of pesticides.
'There are practically no pesticides in the city,' said Jean Lacube, the beekeeper in charge of eight hives at another Paris building in the city's chic 7th district.
City bees also thrive in a town's more temperate climate, he added, and are safe from attacks by the deadly Asian hornet that has decimated bees in the south-west part of France in previous years.
There are some 300 beehives in Paris, Mr Lacube said. 'But beekeeping in a city is a luxury,' he added. 'Beekeeping should be in the countryside, the future is not in the cities.' -- AFP
http://www.straitstimes.com/
Posted by Holly Iossa (Homeschool Homestead) at 7:09 PM No comments: Links to this post

Here is an updated study on how homeschooler fair on standardized test compared to or with public school: http://www.hslda.org/docs/news/200908100.asp . I personally do not take much stock in these test as I could test well even on subject matter I do not know. I just do well on test.
I have seen children who know information and can not take a test. However, I know many family members of homeschoolers would benefit from seeing these stats.
The garden is doing well. I have planted some of my fall items. I have started broccoli and cauliflower in containers to transplant. We are waiting on cantaloupe to ripen. I have a watermelon that will be ready on October 1st. I was told it will take 8 weeks for them to ripen-we picked the last on too early. I have bell pepper and cayenne peppers ripening. Eggplants are producing. Waiting on lots of tomatoes to ripen. I have frozen lots of green beans.
I made peach perserves. Almost all the canned peaches are gone. :( In order to can enough to get through to next season I would have to can about 150 jars. I have tried freezing some as well they are almost the same amount of work and I have a freezer full so I could not freeze the peaches unless I want to devote a freezer to peaches. Here is a picture before they were eaten. 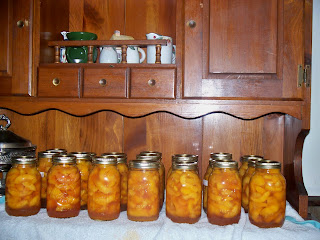 Posted by Holly Iossa (Homeschool Homestead) at 7:37 PM No comments: Links to this post